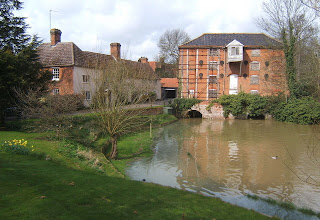 Well, I seem to have stirred up a bit of a hornets' nest with my post on "Grand Designs".
Certain aspects of the matter (by no means all) put me in mind of a case which achieved some notoriety a few years ago, that of Sproughton water mill in Suffolk, where the owner became so aggrieved that he was being forced to keep his listed building in repair, he set up a website to rant about it (not unlike conservation officers who set up blogs to get things off their chests, I suppose I'll have to admit). Despite the former owner's subsequent bankruptcy, the site is still available:
http://www.sproughtonwatermill.co.uk/
Now, there's a lot to read there, but the most important fact to bear in mind as you wade through it is that the work carried out by the local council was done as an emergency repair for the urgent preservation of the building, not as a permanent work of restoration, and as such, naturally fell short of the standards that would have been required in the latter case (indeed, the law generally only allows for the "necessary" work to be done, not any arty-farty stuff). It's also important to realise that the owner had consent to convert the mill to a new use, but did nothing to implement the scheme.
The key page is this:
http://www.sproughtonwatermill.co.uk/html/litigation_1.html
an opinion from perhaps the best-known planning barrister specialising in historic buildings in the UK. The opinion has been posted on the site because the mill's owner believes it vindicates his view. A careful reading, in fact, shows precisely the opposite.
I happen to know many of the key players in this particular farce, and I also know that (despite assurances to the contrary) that comments sent to the site which do not accord with the former owner's view are not published there.
I feel a certain amount of sympathy for those who embark on a lengthy project with little but ideals and enthusiasm, but little or none for those who wilfully misunderstand their own position and then complain when they get hurt. "Look before you Leap".
This case resulted in the departure of a very able conservation officer from the local authority, under frankly intolerable pressure from an ignoramus:
http://www.sproughtonwatermill.co.uk/html/richard_ward.html
But (unreported on the site) it ultimately led to the bankruptcy of the foolish owner, and the vindication of the local council's action:
http://www.babergh-south-suffolk.gov.uk/NR/rdonlyres/BCD8ED18-7E18-430E-8FBB-6DCFA3A029DD/0/smillvin.pdf
I just thought my reader(s?) might like to know that, as the end result was not nearly as widely reported as the events that led up to it.
Posted by Conservation Officer at 22:31