The Joy of Listing 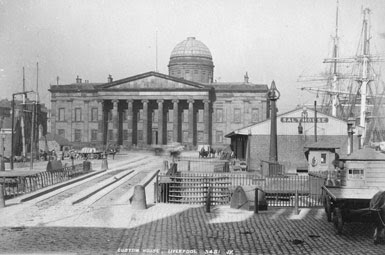 With around 350,000 Listed Buildings in England you'd think that most of what was worth protecting had been identified by now. Certainly that's the subtext of the Government's cynical treatment of the whole Historic Environment business over the last few years - a result of never going outside the M25. And of course, those of us who think that nowhere near enough is listed should remember that even if we pulled them down at a rate of one a day, it would take a thousand years to erase them all - part of Gordon's plan, no doubt, and it would create significant employment in the vitally important demolition sector, as, naturally, did the removal of the removal of the Liverpool Customs House (above) in the years after the Second World War - "relieving unemployment" really was given as the reason for demolition. That unemployment might also have been relieved by repairing it (it had been bomb-damaged but was structurally largely intact) escaped the notice of the City Fathers, which in itself says much of what you need to know about our elected representatives.

Another city that suffered badly in the War was Plymouth, where the same pattern of hasty clearance after the bombing gives the impression, in photos from 1945, of total destruction by the enemy, rather than the truth, which was total destruction by the City Engineer. At least in Plymouth the rebuilding followed a vision (albeit one rapidly watered down by economics and political expediency). It is the legacy of that vision which is now being disparaged and destroyed.

You may laugh, but Plymouth is Britain's only Art Deco city - the architectural language chosen when the rebuilding started in the late 1940s was an already rather charmingly old-fashioned Clarice Cliff mode, and the first stage of the rebuilding followed this diligently all the way along Royal Parade, the new grand avenue crossing from east to west, and up the first part of Armada Way, the great north-south vista from the railway station to the sea (that Plymouth Hoe interrupts the view and prevents a view of salt water was just a mnor inconvenience).


A very loaded consultation has made it quite clear that the council see any further listings as a "constraint" (the City were livid at the listing of their own offices - which are admittedly difficult to like at first glance but are, on close inspection, excellent of their type and date http://www.plymouth.gov.uk/civiccentrereasons http://www.c20society.org.uk/docs/casework/2007_plymouth.html)

And declaring a conservation area has been ruled out too, despite two independent reports (one by English Heritage and CABE) strongly suggesting that much of the city centre should be designated.

But I digress, as always. The protection of Post-War buildings is, for reaons of fashion, going to be a controversial issue for a few more years - Laver's Law of clothing fashion applies just as much to architecture http://www.fashion-era.com/lavers_law.htm

In the meantime, I commend these websites:
http://www.nicebuildings.com/ which is a bit over-enthusiastic even for my tastes at time, but does show that the tide might be turning, and: http://www.nicebuildings.com/gh/home, which deals with Plymouth and is very good on how later alterations, rather than the original designs, are to blame for the tattiness which is all the City Council can see (though the photos don't quite do justice to the experience of being there).

Posted by Conservation Officer at 14:12 9 comments:

New to this whole blogging lark, so please bear with me (I know that'll be taken as an invitation to pick holes and fling abuse)
Expect, if I can make it work, laughter, tears, tantrums, hideous breaches of professional confidentiality, a fair degree of ranting, and perhaps some useful information about the life of a Conservation Officer at a small English local council, dealing with people who've bought a historic building, and want to know "what can I do with it?" (Standard first answer, "What have you done that for? go and buy a nice new house on a Barratt estate and never darken my in-tray again" - you wouldn't believe how much time and heartache that can save)
Posted by Conservation Officer at 23:46 5 comments: