The Joy of Listing - Revisited 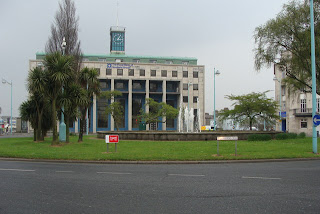 
My very first post was about the evil machinations of Plymouth City Council and their determination not to admit that the post-WWII city centre they have inherited is actually one of the most remarkable pieces of urban design in the country. It therefore gave me no little leap of the heart to discover this week that another of its key buildings - originally the south west of England headquarters of the National Provincial Bank (above), of 1956-8, has been listed Grade II, thereby denying the "City Fathers" another site on which to erect some commercial tat of the sort they've been favouring recently, such as the notorious "Drake's Arse" shopping centre (below). 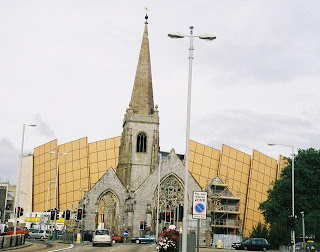 The Royal Bank of Scotland, St Andrew's Cross, Plymouth, is designated for the following principal reasons:
* It is an inventive re-working of the traditional architecture of the bank which remains substantially intact, creating a compelling synthesis of traditional and modern architecture.
* It integrates high-quality decorative art works.
* It is one of the most important buildings of post-war Plymouth.
* It is a prominent and distinctive landmark.

This entirely welcome development comes hot on the heels of the listing of three Plymouth post-war churches, two by the exotically-named Louis de Soissons ("Louis-Emmanuel Jean Guy de Savoie-Carignan, Baron de Soissons" to his friends), and one the last work of Giles Gilbert Scott ("Giles" to his).
On the other hand, the City Council's press release "celebrating " the listing is a masterpiece of frustrated ambition, to anyone who has watched recent proposals with a fearful dread:
One of Plymouth city centre’s most impressive and imposing post-War buildings has been granted listed building status by the Government.
On the recommendation of English Heritage and with the support of Plymouth City Council, the Department of Culture, Media and Sport has listed the Royal Bank of Scotland (RBS) building at St Andrews Cross at Grade II.
Although the building was not completed until 1958, the site adjacent to the Bretonside bus station had been identified for a flagship bank building as early as 1943, when Sir Patrick Abercrombie and J Paton Watson drew up a plan for Plymouth’s reconstruction following the widespread damage to the city centre during the bombing raids of 1941.
Abercrombie and Watson saw much of their Beaux-Arts plan come to fruition in the post-War rebuilding of Plymouth – the legacy of which (the planned city centre around the major axes of Armada Way and Royal Parade) is still with us today and will continue to influence planning decisions made both now and into the future.
The building stood at a visually prominent position within the plan at the east end of Royal Parade and was chosen to be not just a branch bank but the regional headquarters of what was then the National Provincial Bank. The architects (under the direction of BC Sherren) were therefore given a very generous budget allowing the extensive use of Portland stone for the exterior cladding and Travertine marble for the interior finishes.
Professor Jeremy Gould, Chair of Architecture at the University of Plymouth, has described it as the best ‘new’ building in Plymouth. Its listing represents a counterpoint to that in 2003 of the Pannier Market on the other side of the city centre – a very different building in terms of design and purpose but just as significant in the renaissance of Plymouth after the War.
The listing comes hot on the heels of the publication of the City Council’s Area Action Plan (AAP) for the city centre, now out for public consultation. This plan, which sets out the vision for the future of the city centre, recognises the important contribution made by high quality buildings along Royal Parade to the city’s character. The RBS building is specifically mentioned as an example of the grandeur and vision of the original Abercrombie and Paton plan.
On a wider scale the APP says: "It is crucial that key elements of the city’s heritage are respected and integrated into any changes made to the city centre." The listing of the RBS building gives it a statutory protection and acknowledges it as a nationally important landmark structure and therefore one of the key heritage elements of the City Centre AAP.
The Council's newly appointed Assistant Director of Economic Development, David Draffan, said: "The city centre is often criticised for having no buildings of significant quality. However, we have in the Royal Bank of Scotland a prestigious building of the finest quality which has now been recognised by English Heritage and I welcome this decision. The recently published City Centre Area Action Plan takes a realistic and sensible approach to protecting buildings of the highest quality but also ensures that future development in the city centre is encouraged to meet wider regeneration objectives.”
Councillor Ted Fry, Cabinet Member for Planning, Strategic Housing and Economic Development added: "Plymouth is a city of progress and development, yet one which is mindful of high quality buildings. The Royal Bank of Scotland building, in its commanding position at the end of Royal Parade, is an excellent example, as are the Dingles and Debenhams buildings along Royal Parade. This recognition by English Heritage is to be applauded.” Though it's good to see them quoting Jeremy Gould (whose "list everything and declare a Conservation Area" report the City paid for then studiously ignored), do please refer back to the links in my very first post to see how highly Dingles and Debenhams were rated a mere 9 months ago...
Posted by Conservation Officer at 23:39 9 comments:

OK, I'll admit I've not been very active here of late, and I'll also admit that the title of this post is purely to arouse the wrath of an officious git, and hopefully lead to some entertaining correspondence.

Many years after his officiousness was first revealed.

Normal service will, I hope, be resumed relatively shortly.
Posted by Conservation Officer at 23:35 7 comments: