Dead in the water? 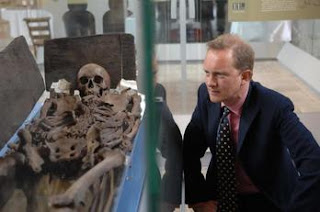 I've moaned before about those, set by chance as custodians of our historic environment, who have no vision. But what happens when the vision is desperately wrong, and at odds with a century or more of best practice?
I was going to hold off from this, but:

Tit of the Week (and probably Tit of the Year) is Dame Simone Thurley, known (behind his back at English Heretics) as Gloriana. Anyone who doesn't understand this opprobrium has presumably not watched the previously media-savvy Thurley wrecking his organisation's reputation by inviting in the same TV crew who gave the National Trust a good kicking a couple of years ago. Exactly what he expected to gain by this four part BBC 2 series is unclear, but those of us "at the coal face" are less than enchanted by last week's episode where "the squint test" was introduced (if you squint at a Grade II* listed building after it's been gutted, it looks the same, so plastic windows, concrete tiles, the sophistication of the original design with varied but controlled infill, etc, no longer matter, according to EH), while this week's performance hints at familial corruption (we never imagined he even had a wife, though she made Lady Macbeth look like the kitten cuddling type - which in itself speaks volumes) which would make the Dear Leader Gordon blush.
No doubt Simone would say something about the recipe for omelettes requiring broken eggs. But note that English Heritage's impoverished relative, CADW, in Wales, for all its own failings dictated by circumstance, has at least managed a few notable conservation successes (not least in presenting its own properties), without them being tied to the "personality" of its own Chief Executive. Can anyone name him? I thought not.
Simon Thurley is an architectural historian of modest ability, who in normal life might be expected to make a living at a minor university (like the one I attended, except that my tutors had open eyes and minds, and encouraged the same in their students - even me). But his slight media talents (as a young Dan Cruickshank-in-waiting) have propelled him beyond his abilities. And now he has allowed that deficiency to be broadcast to the world.
If anyone fancies a (hollow) laugh:
http://www.simonthurley.com/
Thou art weighed in the balance, and found wanting.
Posted by Conservation Officer at 00:57